Kayani formula to be tested again? 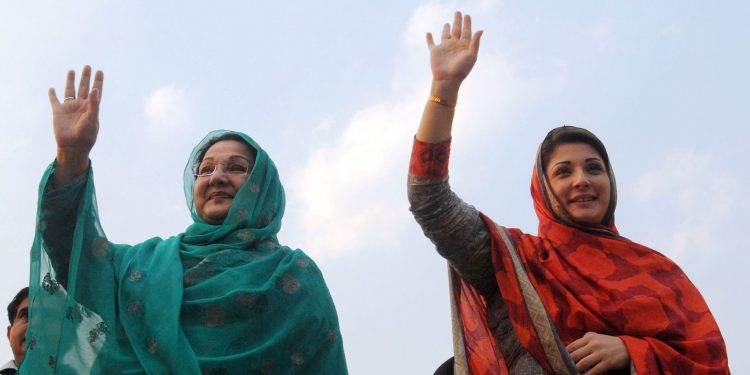 Rumours are rife that a large group of legislators will leave the Pakistan Muslim League-Nawaz (PML-N) as it is weighing options after possible disqualification of Prime Minister Nawaz Sharif in the Panama case.

Sources say Prime Minister Nawaz Sharif may name his wife, Kusloom Nawaz, as the next prime minister, if he is disqualified. It is said she could be elected on a reserved seat for women in the National Assembly. The party believes she could be the best option for the ruling family because it would save the party rule and the system in the country. It could also avoid rifts in the party. However, the problem with the idea is that she is a housewife and has never been in active politics.

There are also reports that the party will go to any length to save Prime Minister Nawaz Sharif’s daughter Maryam Nawaz and Punjab Chief Minister Shahbaz Sharif to secure its political future. However, it is feared that they could also be disqualified by the Supreme Court of Pakistan in the light of findings of the joint investigation team (JIT). In that case, the party has planned to challenge the findings of the JIT and any adverse verdict of the court and drag the case for six more months, so that it could complete its mega development projects and win the next election, even without its top leaders.

According to sources, Benazir Income Support Programme Chairperson Marvi Memon, whose status is equivalent to state minister, has not been in contact with the ruling party leadership for many weeks. It is learnt that she has switched off her phones after speaking in favour of the joint investigation team (JIT) on a news channel, which is against the policy of the ruling party. Many party leaders also confirmed that she was not taking their calls, either at home or office. Her three phones are switched off. Talking to the news channel few weeks ago, she said the JIT had been empowered by the Supreme Court to summon any accused in the Panama case and it was working according to its mandate. Her statement is clearly against the policy of the ruling family and ministers, who have threatened the JIT of dire consequences and made an all-out effort to discredit it since its inception.The National Accountability Bureau (NAB) has also started investigations against her after many complaints emerged against her for massive corruption. As the NAB is under the tight control of the government, it might have forced her to sever her connections with the ruling party.

According to sources, at least 35 legislators will announce quitting the ruling party in few weeks. However, it is said they will not join the Pakistan Tehreek-i-Insaf (PTI). The legislators will become part of an alliance, to be led by former President General (retd) Pervez Musharraf and Chaudhry Shujaat Hussain of the PML-Q. The group will include all factions of the MQM, which would unite under Pervez Musharraf. It will also enjoy big support in the Punjab, with many PML-N legislators from the province joining the PML-Q. It is said the group may bag a large number of seats in Sindh, the Punjab and Balochistan. It could even form governments in Sindh and the Punjab. Recent meetings of PML-Q leaders and people of other provinces with Pervez Musharraf have created speculation in political circles, which see an active role for Pervez Musharraf and the PMLQ in the next election and future politics of Pakistan.

According to speculation, the new alliance could form the government in Sindh after defeating the PPP, with the help of regional and religious parties. The PML-Q could also form the next government in the Punjab with the help of religious parties. It could also be supported by the PTI, which would go to any extent to dislodge the ruling party from its home province. The alliance will also bag a large number of seats in Balochistan and form the government. Even if it is not able to win majority seats, it will be in a position to form a coalition government, which has been the past practice in the province for many decades as part of efforts of the establishment to include all parties in the government.

It is said the PTI may come to power at the Centre, but it will be dislodged in Khyber Pakhtunkhwa, where the PML-N could form the next government. If implemented, it could be General (retd) Kayani’s model, who held the last two elections under the formula of “something for every party.” In 2008, though the PPP came to power, yet the PML-N miraculously bagged over 60 National Assembly seats. In 2013, when the PTI had become a big political force, it was given its due share in politics by handing it the most restive province of Pakistan, Khyber Pakhtunkhwa.

However, it is yet to be seen whether the plan will succeed this time. The PTI protested against rigging in the last election for years and weakened the democratic process. It will also resist if it is given power at the Centre but deprived of its share in the Punjab and Khyber Pakhtunkhwa. On the other hand, the PPP will resist its ouster in Sindh tooth and nail. It has already been reduced to a rural Sindh party from being popular in all the four provinces. It will not accept any move to be dislodged from its last refuge. As regards the PML-N, it will not accept a KP government in exchange for its home province, which it has ruled for decades. However, it can be uprooted by the PTI, not the PML-Q and religious parties.

Law in a slave state