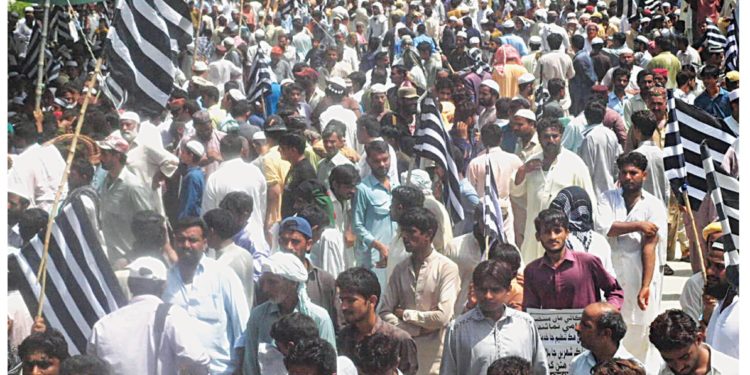 The most important Muslim clerical party of Pakistan, the Jamiat-e-Ulema-e-Islam Fazl (JUI-F), has launched an anti-government struggle, aiming to step up efforts to dislodge the federal government of the Pakistan Tehreek-e-Insaf (PTI). Importantly, main opposition parties, the Pakistan Muslim League-Nawaz (PML-N) and Pakistan People’s Party (PPP), are banking upon the JUI-F to launch a successful anti-government struggle.

Muslim clerical parties have launched important movements in Pakistan against sitting governments in the past and have been quite successful in weakening the governments against whom they spearheaded movements. That is why the main opposition parties, the PML-N and the PPP, have finally decided to pin hopes on the JUI-F to launch a successful movement to bring down the government of Prime Minister Imran Khan. It is important to note that after initial vows by the PML-N and the PPP to let the PTI government of PM Khan complete five years in office, so that there was democratic continuity in the country, both parties have unequivocally announced that the government of the PTI has to be dislodged by any means. This is obviously due to the fact that the National Accountability Bureau (NAB) has been investigating financial corruption cases against the top leadership of both PPP and PML-N and the parties now have only one option, to create political instability in the country to evade conviction by the NAB and put an end to the all-out support of the PTI government to the national anti-graft body.

While both PML-N and PPP are unable to launch large-scale anti-government movement due to lack of street power, they are trying to use the JUI-F’s conservative constituency to dislodge the PTI government. However, the JUI-F, on its part, has been on the forefront to bring down the government of PM Khan. The foremost reason for the JUI-F to launch an anti-government movement is that it is the PTI and PM Khan’s politics which have inflicted irreparable damage on the religious parties, specifically the JUI-F, by defeating the party candidates, including its chief Fazlur Rahman, in its once strongholds in Khyber Pakhtunkhwa.

In the last PML-N government of PM Nawaz Sharif, the JUI-F was a junior coalition partner and when the PTI, under Imran Khan, was holding unprecedented protest movements against the PML-N’s alleged fraud in the 2013 national elections, the JUI-F was in the frontline to defend the PML-N. The JUI-F had two of its parliamentarians serving as federal ministers and its head Fazlur Rahman had put its political weight behind former Prime Minister Nawaz Sharif. Fazl had asked PM Sharif not to submit resignation at any cost, as demanded by the PTI and Pakistan Awami Tehreek, which were holding a joint protest for the ouster of the PML-N government. Surprisingly, Fazl had gone an extra mile to support and defend ex-PM Sharif and in this connection even outperformed most senior members and parliamentarians of the PML-N. On the occasion, Fazl had announced holding anti-PTI and anti-PAT rallies across Pakistan. The purpose was to give a tit-for-tat response to PTI and PAT. However, JUI-F’s support to Sharif and opposition to the PTI was not politically motivated, but driven by vested interest of its top leadership, particularly Fazl and his family members.

The JUI-F had been part of almost all governments since early 1990s, irrespective of whichever party, whether the PML-N or the PPP, was in the saddle. The party was even part of the government of the Pakistan Muslim League of the Chaudhry of Gujrat in Balochistan from 2002-2007, when General Pervez Musharraf was the godfather of the party. This was irrespective of the fact that the religious parties alliance, the Muttahida Majlis-e-Amal (MMA) which the JUI-F headed, ostensibly opposed Pervez Musharraf but at the same time facilitated the extremely unconstitutional step of electing Musharraf the president of Pakistan while in military uniform.

In the 2018 national elections, the JUI-F was nearly routed and Fazl was defeated and he could not make it to the National Assembly after a considerable time. With it, the JUI-F head also lost its long-held lucrative position of Chairman Kashmir Committee, an inconsequential body to promote Pakistani stance on Indian occupied Kashmir. Being head of the Kashmir Committee, he enjoyed the status of a federal minister. So, it is the PTI government that has thrown him out of the Kashmir Committee and the cut is deeply felt by Fazl.

Today, JUI-F head Fazl claims he is supporting the PML-N and PPP for the sake of democracy and the Constitution. However, history suggests that the JUI-F has had nothing to do with democracy or the Constitution but to get as much power for itself as possible. The key motive of the JUI-F is to have power and then cling to it by hook or crook. For this, Fazl is even ready to do what someone wants him it to do. It is no secret, thanks to the Wikileaks, that after the 2002 unprecedented electoral success of the religious parties alliance, the MMA, headed by the JUI-F, by bagging more than 50 seats in the National Assembly, Maulana Fazl, in a meeting with then US Ambassador in Pakistan, Anne Patterson, had asked the latter that he (Fazl) was ready to do whatever Washington would ask him to do in return for the US support to him to become the country’s prime minister. Although, the US could not trust the wily politician while the religious parties alliance also was not anywhere near a majority of more than 171 NA seats, yet Fazl wanted to try his luck. He failed to get any support from the US and consequently his dream of becoming the country’s prime minister, to enjoy the perks and privileges of the position, dashed to the ground.

JUI-F head Maulana Fazl, keeping the traditional character of clerics of his ilk, by labelling opponents, mostly liberal and moderate Muslims, as “non-Muslims” and “agents of Christians and Jews” has been labelling PM Imran Khan as ‘agent of Jew’ and even a Jew during the electioneering. On one occasion during the PTI sit-in against the PML-N government, Fazl went to such an extent that he levelled loathsome charges on women participating in the sit-ins of the PTI. The JUI-F, through such bizarre statements, aimed to win back the support of the conservative constituency, even which ditched the party in the last elections.

The most sordid aspect of the JUI-F lust for power has been that, while representing a specific school of religious thought, it has brought society to the brink of clash between liberals and conservatives and on the other hand sectarian clash between its own cadres and the one represented by the PAT and its ally, Ittehad Bainul Muslimeen. For the purpose, the JUI-F even activated its offshoot Ahle-e-Sunnat-Wal-Jamaat, the new face of the erstwhile Sipha-e-Sahaba Pakistan, in the Punjab.

Despite that Khan’s party gave the JUI-F considerable drubbing in KP and even defunct FATA by bagging majority votes and seats, both the KP and FATA along with the Pashtoon part of Balochistan have been traditional strongholds of the party. This has largely been due to the clerics’ social influence within once ultra-conservative societies there. The JUI-F has always used its social influence in the regions for its political and power base. However, despite the fact, nationalist, moderate and progressive parties, like the PPP, ANP, PkMAP and now PTI, have always got more support from people in all traditional strongholds of the JUI-F. This has prevented the JUI-F from forming its own government in KP or Balochistan. The only instance when the JUI-F install have its chief minister in KP was in 2002, when the MMA had won majority in province. However, the treatment meted out to the rest of the religious parties, including the JI and Jamiat-e-Ulema-e-Islam Sami faction, compelled both of them to withdraw from the alliance but not before enjoying the perks and privileges of power for five years. Ironically, the JUI-F is now even out of the Balochistan government where it has been in the government as a coalition partner since early 1990s.

All this has added to the frustration of the JUI-F and, therefore, it is doing it utmost to bring down the PTI government to create space for itself in the power corridors of KP. However, one thinks that the JUI-F does not have any strong support base to dislodge a popularly elected government. Nevertheless, if the PML-N and the PPP prod the JUI-F to launch an anti-government movement, it may not be successful but would have important societal consequences.

New hopes after the 26th Constitution