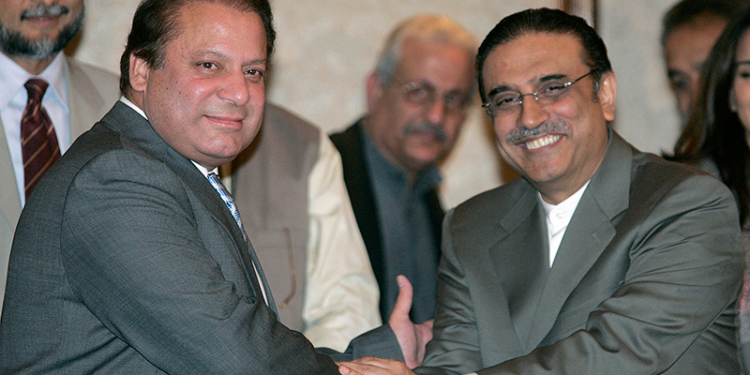 There is a need to examine the destruction of the Pakistani economy by a succession of political leadership. The fact is that every PML-N and PPP leader has salted money abroad. All these funds have been siphoned away from the state of Pakistan.

The state of the city of Karachi is the most obvious example. This once vibrant city of twenty million, had provided jobs in the textile, leather and garment industry, and this is where some of the largest units were based. Karachi also provided a large pool of labour and office workers, including the highest number of English speaking, computer savvy staff, without which no management can exist. The gleaming high rise buildings on Shahrah-e-Faisal are an example of modern offices manned by these workers. This led to large export growth and at one time accounted for nearly 80% of Pakistan’s exports of manufactured goods.

Political policies have damaged Karachi for various reasons. The main reason has been the flawed policies which caused the drying up of capital which is the urgent need for successfully operating these industries. The politicians have no interest in putting money into these industries in Pakistan. They prefer to send money abroad into real estate investments in Dubai and the UK, thus depriving Karachi of much needed capital. Under the circumstances, workers of Karachi had little choice but to seek other means of income.

Real estate boomed, but because of the shifting of desperately needed capital, exports floundered. In the present case, the production has shifted from Karachi to Bangladesh and Sri Lanka. Karachi-based industries are now empty buildings. The roads are in disrepair and make travel within the city a nightmare. Even the most educated Pakistanis, with their expertise, have no avenue to channel this asset.

The MQM must also be blamed for the proliferation of violence, blackmail, kidnapping and arson. A classic case was seen where approximately 250 workers were burnt to death in Karachi. A prosecution witness deposed that MQM men set fire to the Baldia factory over refusal to pay Rs250 million. Here was a politically-motivated fire caused by a party that demanded an extortion of money from the factory owners. This resulted in the foreign partners fleeing Karachi and moving their investments to safer havens, thereby depriving people of desperately needed jobs.

In the 18th century, the Jewish community made a policy that 30% of their profits would be ploughed back into their businesses, 30% into real state and 30% sent abroad.  This is how the Swiss banks came into being and the model has been replicated many times. In the days of Ayub Khan’s government, Pakistani businesses followed the example. It was after Bhutto’s nationalisation that the industries were left with nothing, and had to start from scratch.

I was approached by the late Mir Afzal Khan, a minister in Bhutto’s cabinet, who asked me to find a suitable investor from Saudi Arabia. Mir Afzal was the richest Pakistani at that time. When I asked him why he would need a Saudi, his response was quite simple. Bhutto, he said, may be dead, but who knows when this ghost of nationalisation may be resurrected! This shows how deep were the fears and fallout of Bhutto’s nationalisation. While no industry alone can be deemed a success by itself, but the failures that followed nationalisation put an end to the glorious days of a fledgling Pakistani industry.

However with Nawaz Sharif, the pendulum swung the other way. Instead of people in Pakistan investing in industries and factories, they plundered the country’s resources, and without going through the formality of putting up industries they decided to use their political muscle to encash Pakistani assets and invest in real estate abroad. The bulk of real estate is now in Dubai; many of the glittering apartment buildings in Dubai are owned by Pakistani politicians and senior bureaucrats.

This is how precious assets have been stripped and relocated to a “safe haven”. Rather than investing in Pakistan, the choice has been to add to the fortune of Dubai and deprive Pakistan if this much needed capital which could have been deployed into generating income and revenue for investing in new factories in Pakistan and creating new jobs for Pakistanis.

What good are the Sharifs’ billions, residing in the UK, when the paucity of jobs and capital exists in Pakistan? The PML-N‘s strength in Pakistan has been maintained primarily as a bulwark to protect any move against the Sharifs assets or persona by a Pakistani government. This is the obvious reason why Prime Minister Imran Khan cannot bring back the looted wealth. The spectre of a civil war is a threat taken seriously by all concerned and is probably the reason why the Sharifs and Zardaris have escaped punishment. Imran Khan is caught between a rock and a hard place. Either Pakistan will be harmed or we have to wait for a younger, braver leader.

At a recent dinner one of the invitees stated that Nawaz Sharif’s dream of friendship with Modi could have resulted in closer ties with India. I agreed and replied that yes, if indeed Nawaz Sharif would also agree to conversion to Hinduism as Modi would settle for nothing less! Jinnah saw this 70 years ago and gave us a country where we are free to practice Islam.