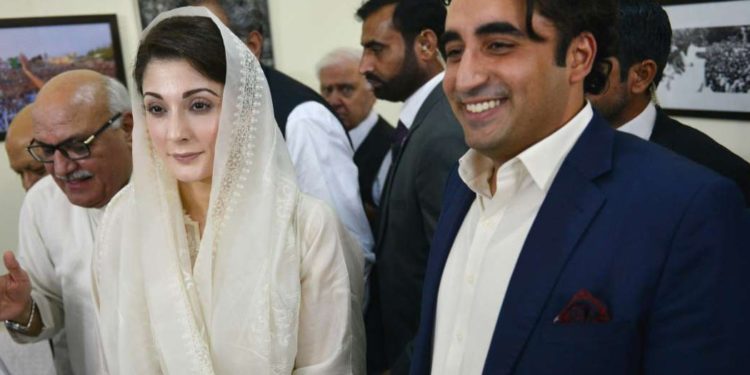 Months after confrontation with the government in the parliament, the opposition has decided to launch a movement against the government. The agitation is unlikely to succeed because of serious rifts among opposition parties.

Many in the Pakistan Peoples Party (PPP) and the Pakistan Muslim League-Nawaz (PML-N) are opposed to the idea of joining hands against the government. They believe it will malign the image of the parties in the public. PPP leader Aitzaz Ahsan has publically warned his party chairman Bilawal Bhutto against playing into the hands of the Sharif family after he met former Prime Minister Nawaz Sharif’s daughter Maryam Nawaz twice in few weeks. He warned him that the Sharif family could use him for its personal benefits in the name of the agitation against the government. “The Sharif family can become silent on a hint of relief from the establishment and Bilawal should not trust them,” he told a news channel recently.

Experts say political confrontation between the Pakistan Tehreek-i-Insaf (PTI) government and the opposition looked imminent after Prime Minister Imran Khan asked his “hawks” to target leaders of the opposition parties more vociferously. After the arrest of former President Asif Zardari, PTI leaders predicted bad days ahead for the opposition and believed more of their leaders would go to jail, which united the opposition parties and they agreed to give a hard time to Prime Minister Imran Khan, both inside and outside the parliament. It is said Prime Minister Imran Khan is inclined towards the hawkish party members and has even conceded that he took a wrong decision by not resisting the nomination of PML-N President Shahbaz Sharif as the Leader of the Opposition as well as chairman of the Public Accounts Committee, which he did on the advice of saner voices in the party. It is said he had instructed his colleagues not to allow Shahbaz Sharif to speak in the parliament.

Consequently, the confrontation paralysed the parliament. After wasting a week, the government finally agreed with the opposition not to disrupt a debate on the federal budget in the National Assembly following reconciliatory efforts by Deputy Speaker Qasim Suri that brought both sides to the negotiating table. After hour-long negotiations between representatives of the government and the opposition, the two sides agreed that they would listen to speeches of each other with patience and without creating disturbances. They also reached an understanding that a treasury member would be given an opportunity to speak after every speech of an opposition member. The deputy speaker had facilitated the talks after failing to maintain order in the house, as the treasury members created a ruckus as soon as the opposition leader began his speech. Shahbaz Sharif, who had been trying to speak for the past three days, continued his speech amid noisy protests by the treasury members, including federal ministers, who ignored warnings by the chair to maintain discipline.

The opposition also increased contact with each other outside the parliament. Weeks after leaders of the opposition parties met at an Iftar dinner hosted by PPP Chairman Bilawal Bhutto in Islamabad, he reached the Raiwind palace of the Sharifs. In their joint move to build a momentum against the government, Maryam Nawaz and Bilawal Bhutto discussed a joint strategy for a protest movement both inside and outside the parliament against what they called anti-people actions of the government. They also discussed references filed against superior court judges, “vindictive” accountability process, alleged violation of basic human rights and censorship of the coverage of the opposition’s activities as well as attacks on journalists. For some, the meeting indicated that Maryam Nawaz has practically taken over the party from her uncle, Shahbaz Sharif.

Asserting her authority, she rejected an offer of a charter of economy made by PML-N President Shahbaz Sharif to the government and termed it a joke. Addressing a press conference, she said the opposition should not show any slackness in holding the PTI government responsible for “ruining the economy” within 10 months after coming to power with a “stolen mandate.” She said the opposition parties should not become a partner to the government’s “crime of ruining the economy and making life of the masses miserable.” “Lending support to the incompetent government would be like an NRO. The prime minister immediately agreed to constitute a committee on the proposed charter of economy as he wanted to make the opposition parties partner to his crime,” she observed. Analysts say she has once again adopted a harsh tone against the government and the establishment after a bail petition of her father and former Prime Minister Nawaz Sharif on medical grounds was rejected by the Islamabad High Court. She had kept quite for many months in anticipation for relief to her father. Now, she has decided to fight for rights of prisoners in the country after hopes of release of her father have diminished.

The opposition can start a movement against the government. However, it must be clear about its agenda. It faces problems, like trust deficit, between the PML-N and the PPP, which still persists despite Bilawal-Maryam meetings. It will be difficult for the opposition parties to put up an impressive show, like the PTI dharna in 2014. It will also have to consider: who will replace the government after long agitation creates unrest in the country? What if Prime Minister Imran Khan is forced to resign? Will it pave the way for new elections or allow undemocratic forces to take over the country? Any case, it will be difficult for the opposition parties to save their leaders from accountability, which is their prime agenda. In fact, harsher accountability will begin if a new government is installed.

A breakthrough at last?